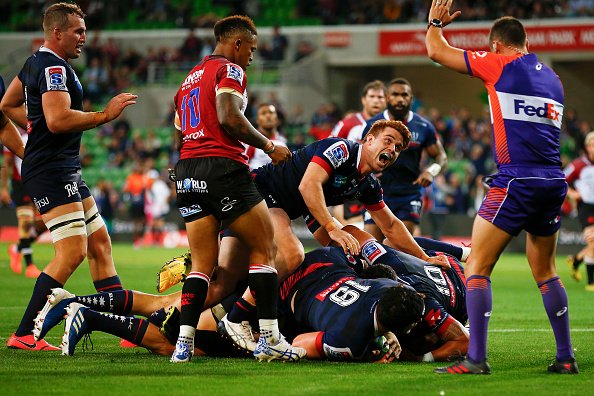 MELBOURNE, AUSTRALIA – MARCH 07: Dane Haylett-Petty of the Rebels scores a try during the round six Super Rugby match between the Rebels and the Lions at on March 07, 2020 in Melbourne, Australia. (Photo by Daniel Pockett/Getty Images) FILE PHOTO: Damian Willemse of the Stormers breaks a tackle by Matias Moroni of the Jaguares during a Super Rugby match between DHL Stormers and Jaguares. (Photo by Ashley Vlotman/Gallo Images/Getty Images)

SANZAAR CEO Andy Marinos reaffirmed that there were no plans to disband SANZAAR, an amalgamation of the South African, Australian, New Zealand and Argentine rugby unions, following persistent speculation about its future.

SANZAAR is also the body which oversees Super Rugby and The Rugby Championship competitions.

There has been speculation that SANZAAR might split following reports of a restructuring of Super Rugby which will result in the axing of South African teams, which will in turn join the Guinness PRO14 in Europe. There has also been talk of South Africa joining the northern hemisphere’s Six Nations in an expanded eight-team tournament which will also feature Japan.

These reports have been fuelled further by the launching of domestic rugby competitions by New Zealand and Australia, and South Africa’s guarded responses to questions about quitting SANZAAR.

“The Member Unions remain committed to the long-term future as a Joint Venture,” Marinos said.

“We all recognise the current challenges we face in trying to settle on any potential Super Rugby competition structures moving forward under the pandemic environment, however the restructuring of Super Rugby through reformatted competitions does not mean the dismantling of SANZAAR.”

Marinos also confirmed that the Jaguares of Argentina will not take part in Super Rugby this year due to the COVID-19 pandemic and the resulting restrictions implemented in the country.

The Argentine government implemented a strict quarantine on the capital Buenos Aires and its surroundings following a spike in cases.

“Unfortunately, the pandemic has been particularly tough for our partners in Argentina as the size and length of the ‘lockdown’ has meant they are not able to play in any further revised Vodacom Super Rugby domestic competition this year,” he said.

It is not yet clear how the tournament’s format will be affected by the withdrawal of the Jaguares.

Super Rugby was suspended indefinitely in mid-March due to the COVID-19 pandemic.