Former Wrightbus employees waited outside the factory for news on Thursday

The owner of the Wrightbus factory has said he has not been able to reach a deal to sell it to a new owner.

Jeff Wright said that the sticking point had been farmland he does not consider part of the factory site.

In a statement released on Thursday, bidder Jo Bamford said he had met the asking price for the Wrightbus factory and the land.

“Mr Wright has since refused this offer and has now asked for a significantly higher sum of money,” added Mr Bamford.

The English industrialist wants to buy the Wrightbus business and the factory through his Ryse Hydrogen company.

He said the sum offered matched “the amount that the factory and associated land was purchased for two years ago from JTI”.

Earlier on Thursday, former Wrightbus director Jeff Wright said the failure to complete a deal was “deeply regrettable, especially after the exhaustive efforts all of us involved have gone to in providing every possible support”. 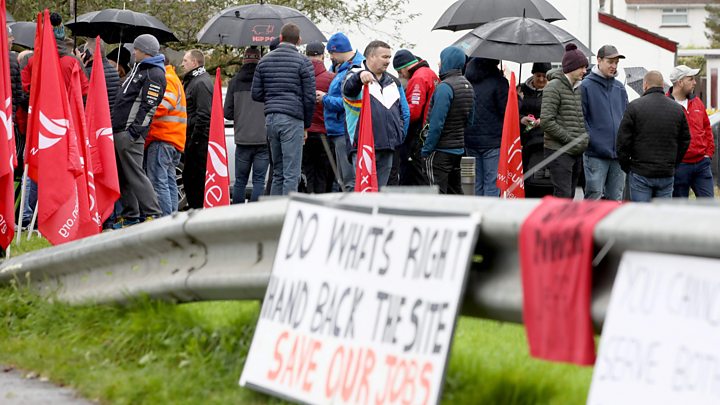 Media playback is unsupported on your device

The Ballymena business was placed into administration and put up for sale last month.

The Wrightbus premises are owned separately from the manufacturing business and held in a company called Whirlwind Property Two, which is not part of the Wright group and is therefore not under the control of the administrator.

The property company is controlled by Mr Wright, the former owner of Wrightbus.

Mr Wright said he hoped the firm’s administrator Deloitte had “not been sidetracked by the Bamford engagement” and could work with the remaining bidders.

“If the answer is that we cannot get the deal consummated, in terms of the land sale deal, then I’m afraid the worst of all situations prevails and we’re left with liquidation of assets of the company,” he said.

“It’s either the continuation of building the best buses produced in the world or it’s the end of bus building in Ballymena.”

But Jeff Wright said Mr Paisley’s role had been “unhelpful to say the least” and he advised that the MP to “leave the business of deal making to the professionals at Deloitte”.

“In what could be considered a vote-campaigning exercise, Mr Paisley continually championed Mr Bamford throughout this process,” added Jeff Wright.

“It is not dead in the water – it’s hanging by a thread,” said Unite official George Brash.

Mr Brash said he understood an outline deal was reached on Wednesday but changes were made by Mr Wright on Thursday morning, which “threw the entire negotiations into uncertainty”.

He added: “Unite has sought to engage directly with Jeff Wright, but as yet our request for a meeting has gone unanswered.

“We are calling on all sides, in particular Jeff Wright, to do the right thing and adopt a sensible approach that will open the door to a future for these workers.”