The art of the deal is not the art of war 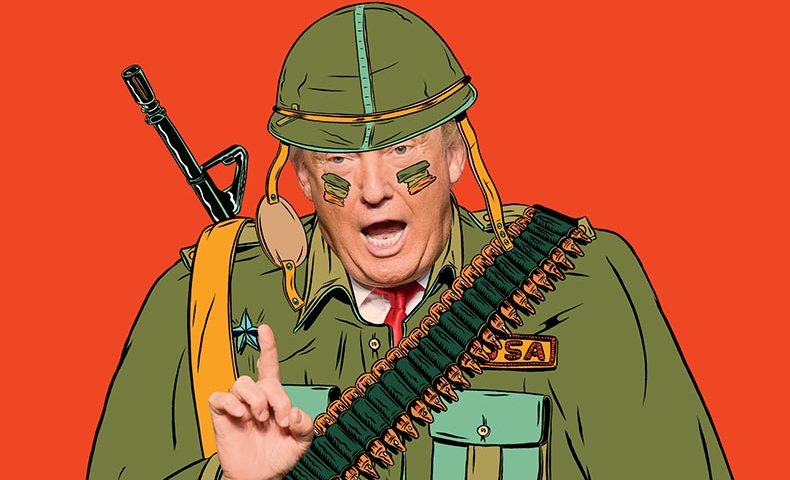 For Donald Trump, deal making is more than an activity. It shapes his identity—he boasts that he was born with the negotiator’s mind-set—and is a central part of his pitch to be the next president of the United States.

But does Trump’s negotiating technique stand up to scrutiny? And how would his style of negotiating extend to the realm of international relations or to showdowns with representatives of Congress? His 1987 best seller Trump: The Art of the Deal provides some guidance. Although I have taught negotiation to MBA students for more than 20 years, I confess that I had not read the book until recently.

It opens with a good sense of how much Trump both enjoys negotiating and views it as his very essence. “I don’t do it for the money,” he writes. “I’ve got enough, much more than I’ll ever need. I do it to do it. Deals are my art form.”

He has hammered this theme on the campaign trail, attacking the Obama administration for its weakness in dealing with other countries, in particular for being soft on China when it comes to trade and allowing Iran to hoodwink the west on its nuclear ambitions. If he were elected president, things would be very different, he suggests. We’d have an experienced deal maker in the White House.

I am agnostic about whether or not Trump is a master deal maker. But even Trump doesn’t actually know how good a negotiator he is. Few professionals know that about themselves. That’s because, unlike students in the classroom negotiation exercises that I teach in my MBA classes, we don’t really get much feedback about how well we perform in negotiations in our daily lives.

Consider business deals. If corporate leaders strike an agreement, they don’t then sit down for an open and honest postmortem that might reveal if the deal could have been better for one of them. In a merger, for instance, no one really knows the other side’s bottom line: the target company might have accepted a lot less, and the acquiring company might have paid a lot more, but we cannot be sure how much more, since such information remains confidential. And perhaps a different deal structure would have produced value for both the buyer and the seller.

The result is that it’s very easy to walk out of a negotiation telling yourself that you are a much better negotiator than you really are. It’s self-reinforcing: people who think they’re good negotiators persist in believing just that. If you failed to strike an agreement, you conclude that no deal was possible. If the deal netted you $20 million more than walking away, it seems self-evident that that’s the best you could have achieved. Research I have conducted with Duke’s Richard Larrick suggests exactly this. Negotiators walk out of a negotiation believing that they have claimed 65 percent of the pie. The correct answer should be 50 percent, unless you live in Lake Wobegon.

“The ultimate value of a deal requires implementing the deal, and that depends on people’s ability to work together.”

Self-defined “good negotiators” tend to ascribe their success to their traits—being aggressive, talking a lot, being a good listener, or whatever else they think contributed to their success. But playing up any of those traits in future bargaining may not be a good idea.

It is probably no surprise that Trump’s overall tone in The Art of the Deal is pugnacious. One of his key pieces of advice is to “Fight back.” He casts negotiation as a zero-sum game, with a clear winner and a clear loser.

But like any approach to negotiation, that attitude only works some of the time. It may be successful if you’re trying to drive a hard bargain in a pure price negotiation. But it may fall flat if the negotiation requires that one party really listens to the other, that they collectively try to solve a problem, or that they figure out how to craft imaginative trades.

The pugnacious tone also points to a big missing piece in The Art of the Deal as a primer for negotiation: the lack of any discussion about the role of relationships in negotiation and the process of discovering joint gains. Relationships are critically important in negotiations, because in most important business situations, the final agreement or contract just defines the potential value of a deal. The ultimate value requires implementing the deal, and that depends on people’s ability to work together.

To be fair to Trump, it’s possible to go too far in stressing the importance of relationships. Sometimes people do so much to preserve a professional relationship that they give everything away. It is perfectly possible to be tough and also negotiate with the sort of integrity and respect that helps build and preserve business relationships.

Another danger of treating every negotiation as a zero-sum game is that you may gain in the short run while sacrificing greater gains in the longer run. A common negotiating trick in this regard is the pretend mistake. It works like this: after two people strike a deal, one says he has to check his calculations, and on doing so, admits that he made a mistake and apologizes. “But if you could throw in free shipping,” he continues, “we still have a deal.”

It’s a great trick, one that people use because it often works in the short run. But in the longer run, it could be exposed as a deceptive technique that threatens to destroy a relationship. Driving a hard bargain is like a sugar high: the thrill doesn’t last, and the long-term effects are harmful.

Because there is no single format for negotiations, it’s hard to think about a simple recipe for being a good negotiator. And yet Donald Trump claims to have such a recipe. In The Art of the Deal, he offers 11 tips to make you a better negotiator. Some of these tips are sensible, but obvious and well known. Others are suspect, vague, and unsubtle. (See Should you take Trump’s advice? for a tip-by-tip look at Trump’s pointers.)

Even the idea of offering negotiating tips goes against one of Trump’s own maxims in The Art of the Deal: that great negotiators are born, not made. He writes,

More than anything else, I think deal-making is an ability you’re born with. It’s in the genes. I don’t say that egotistically. It’s not about being brilliant. It does take a certain intelligence, but mostly it’s about instincts. You can take the smartest kid at Wharton, the one who gets straight A’s and has a 170 IQ, and if he doesn’t have the instincts, he’ll never be a successful entrepreneur.

For Trump, then, bargaining is less about being smart than about using your instinct. I take issue with the idea that good negotiators are born, not made. Even if we can agree that better-tuned instincts can make you a better negotiator, it’s also true that some instincts keep you from improving as a negotiator. Consider sports. Success for athletes often means finding the right coach to help them overcome instincts and improve technique. The same is true of professionals. Psychological science has documented many biases and cognitive traps that individuals can avoid through training or improved decision processes.

Even if Trump does believe—as many universities, and business schools in particular, long have—that negotiating skills can be taught, his instruction to aspiring deal makers tends toward the abstract. He writes, for example, that “leverage often requires imagination, and salesmanship.” While that may be valid (if somewhat intuitive and even obvious), it is pretty empty advice without any sense of what it is we need to imagine and sell. What are the sources of leverage in negotiations? How do we use them? Many sources of leverage are not immediately obvious, yet Trump offers nothing to help the reader figure out how to identify them.

If you enter a negotiation feeling as if you have leverage, it’s more likely to turn out well for you than if you feel that you’re powerless. More importantly, though, it’s critical to think about what you need to do to make it seem that you are more powerful than the other party, whether or not that is accurate. In many ways, leverage is the perception that the other side is in a weaker position. It’s about perception and not necessarily reality. Mastering the issue of leverage entails understanding how psychology can be harnessed to effectively shape your counterpart’s perceptions. That sort of preparation requires a deep understanding of the situation, the people involved, and psychology.

For example, in my MBA class, I tell students that one source of leverage in bargaining is recognizing why “negotiation traps” work. Consider two people haggling over a price. The buyer says “$29,” and the seller responds, “$30.” Now imagine that the buyer says, “Let’s split the difference—$29.50,” and the seller replies, “Can’t do that. But I can if we split the difference again—$29.75.” In many cases, that trick works, and the buyer caves in. Many of my students confess that they would cave, too. When I probe why, two things always come up. First, people give in because there’s not much money involved. What’s an extra quarter? Secondly, people are tired, and they want to get the deal done. At that point, I stop the discussion and ask, “You’re tired. What else is true?” Eventually, but not immediately, someone interjects that the person who used the trick is also tired. One tired person has turned his exhaustion into leverage, knowing that his negotiating partner is just as eager to be done. After the debrief, my MBAs realize that in such cases, the spotlight can be shone the other way as well. There are lots of similar examples of nonobvious sources of leverage.

Trump has clearly built a business empire, apparently on the notion that all negotiations are tug-of-war battles for money, resources, and power. Whether such an approach would work well in the Oval Office is now up to American voters.

George Wu is John P. and Lillian A. Gould Professor of Behavioral Science at Chicago Booth.