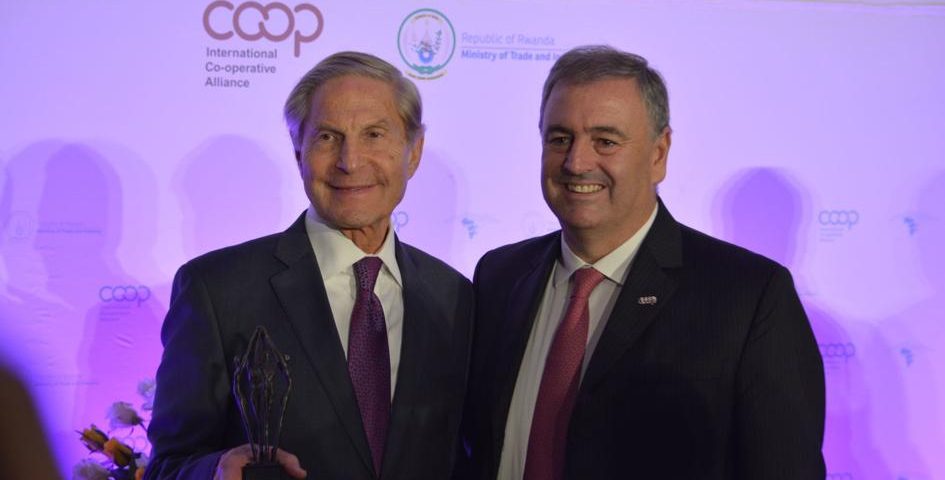 As chairman and co-CEO of CCA Global Partners, Howard Brodsky oversees 15 business cooperatives that together serve one million small businesses in four countries and 20,000 childcare centers across America.

Two weeks ago, he traveled to Rwanda to be honored as the first American to receive the Rochdale Pioneers Award from the International Co-operative Alliance at a conference that included 1,200 people representing more than 100 countries.

So why does he still find himself explaining how cooperatives work 35 years after co-founding the Manchester company?

“I think a lot of people don’t realize the scale of cooperatives. There are a billion members worldwide and 280 million employees,” he said during an interview last week.

For Brodsky, promoting the concept is part of the job. It means he spends as much as 15% of his time traveling around the United States and beyond, speaking at events focused on cooperatives.

“I’d say it’s capitalism with a conscience,” Brodsky said. “It’s very much a for-profit, but the people who are receiving the profit own the co-op. It’s an enormous tool to level the playing field.”

CCA Global Partners was founded in 1984 when Brodsky and business partner Alan Greenberg established Carpet Co-op of America. They launched Carpet One in 1985 with 13 members and doubled that by the end of the year, reaching $25 million in sales. (Greenberg died in 2007.)

CCA has since expanded to 14 other sectors, including home furnishings, business services and sports retail stores.

“We’ve been very innovative in starting cooperatives that never existed in those sectors,” said Brodsky, who says he has an easier time explaining the concept if he refers to cooperatives as a shared-ownership model.

Member businesses pay monthly fees for access to sales assistance, customer relationship management, human resources, financial services, training and other benefits. CCA employs about 165 people at its headquarters in the Millyard and about 200 at its operations center in St. Louis. The company plans to add 43 positions over the next year, including 23 in Manchester, according to 2020 budget information provided by CCA.

While the cooperative concept in the U.S. might be best known through Ace and True Value hardware stores and independent food co-ops, the concept has a wide-ranging impact beyond consumer brands and groceries. For example, most of the two million farmers and ranchers in the U.S. belong to one or more farmer cooperatives, according to the National Council of Farmer Cooperatives.

Brodsky said the setting for this year’s International Co-operative Alliance conference was chosen because of the role of cooperatives in Rwanda after the 1994 genocide during which ethnic Hutu extremists slaughtered 800,000 people.

“After the genocide, the cooperatives helped rebuild the country. Four out of every 10 people in Rwanda is a member of a cooperative,” Brodsky said.

Four years ago, Brodsky formed Cooperatives for a Better World, a nonprofit that promotes the benefits of shared ownership. The organization has partnered with cooperatives in 14 countries, reaching more than a quarter of the world’s population, offering resources, marketing materials and training. In a world where corporate giants like Amazon threaten the livelihood of small businesses, co-ops offer strength in numbers.

“How can you have scale and still maintain your independence?” Brodsky said. “Most family businesses don’t want to be part of something bigger or be bought out. But they need scale. With technology today, the sophistication of marketing and buying, scale is incredibly important.”

Brodsky sees the rise of the “shared economy” as a chance for cooperatives to gain a stronger foothold.

“A company like Uber really should be a cooperative owned by the drivers,” he said. “There’s an entire movement called the platform cooperative. So there’s a lot of new ones starting where the ownership is owned by the users rather than by a public company that is draining all the money out.”

Trebor Scholz, an associate professor at The New School in New York, was among Brodsky’s colleagues who nominated him for the Rochdale Pioneers Award. Scholz is the founder of the Platform Cooperativism Consortium and the Institute for the Cooperative Digital Economy.

“As a visionary leader and entrepreneur himself, Howard has a passion for invention,” Scholz wrote in a letter of support. “He understands the importance of championing emerging ideas and supporting the next generation of cooperative organizers.”

Mike Cote is the business editor of the New Hampshire Union Leader. Contact him at mcote@unionleader.com or (603) 206-7724.