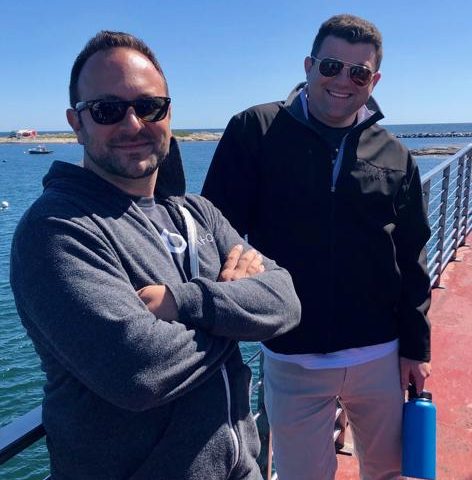 Jason Sgro has a hunch his company might be able to recruit some engineers in Manchester.

The Atom Group once had a presence in the Queen City, but the Portsmouth company had a tough time competing for talent with bigger players like Texas Instruments, DEKA and Dyn.

Now that Oracle is shuttering the Dyn operation it acquired a few years ago, Sgro would like to connect with some of the 200 displaced engineers who once had a home in the Millyard. The Atom group plans to set up an office in Manchester next year.

“We’re kind of living in the post-Dyn engineering apocalypse right now,” Sgro said Wednesday during an interview at the Bridge Cafe. “Dyn’s sale, like all sales, benefited a bunch of people — like five. Everyone else is hunting for work, scrounging. And what it’s done is create this great opportunity in Manchester.”

The Portsmouth software development and internet security firm works with government agencies, small to medium-size businesses, and corporate clients like IBM, Intuit and Yamaha. But it has pegged much of its growth on working with technology startups.

Sgro commutes to Portsmouth from his home in Manchester, where he and his girlfriend are raising two young girls. He wants his company to have a presence here.

“This is the first time we’re really strongly looking at reopening an office in Manchester because the talent is available again,” Sgro said.

“They are people that I knew from my childhood. We went to school together. They’re now 20-year industry veterans,” he said. “They’re the type of people that we’re looking for.”

Before joining the Atom Group, Sgro worked for AgaMatrix, a medical device company in Salem that ramped up quickly.

“When I started we were a handful of people. We went from maybe 25 people to 700 people in four years. I rode that wave,” said Sgro, who left the company in 2015 after a round of capital investment.

“That really gave me the freedom to say, ‘Hey, what do I want to do and how can I keep investing in this ecosystem?,’” he said.

The West High graduate went to school with former Dyn executives Jeremy Hitchcock and Kyle York, and like them chooses to live and work in New Hampshire rather than Boston or Silicon Valley.

Both Hitchcock and York have continued to invest in New Hampshire companies as well as launch their own new businesses. Hitchcock co-founded the internet-of-things security company Minim, and York recently launched an investment firm that is working with startups.

Sgro sees a role for the Atom Group with York’s effort.

“We’re looking at opportunities to have our company really strongly go in and help these startups build. Because I don’t want him to invest capital and have them waste it trying to build their own engineering teams, really be slow to market,” Sgro said. “We do it economically. We do it quickly. The teams are already there.”

The Atom Group, which employs 25 people, was founded in 2007 by Tom Herer as a web development company. Sgro, who joined in 2016, and fellow partner Matt Chepeleff, who joined in 2015, have since taken over the company. Herer remains an investor and serves on the company’s board. The company’s clients include the state Legislature. Sgro spends one day a week in Concord serving as an IT and cyber security adviser.

Atom generates most of its revenue these days from building and securing startup companies, particularly those raising their series C funding, when a company has already demonstrated success and is working on gaining market share.

“My job is not to own your company forever. I want you to learn, but I don’t want you to spend two years of capital building an engineering team if we could be building a product,” Sgro said.

And he likes working with people he knows.

“I think there’s this great opportunity to move back into Manchester and really help the startup community that Jeremy and Kyle and everybody are creating here because that money is now being redistributed,” he said. “They’re smart guys, and their distributing it wisely.”

Mike Cote is the business editor of the New Hampshire Union Leader. Contact him at mcote@unionleader.com or (603) 206-7724.