Can the king of beer M&A curb its deal making? 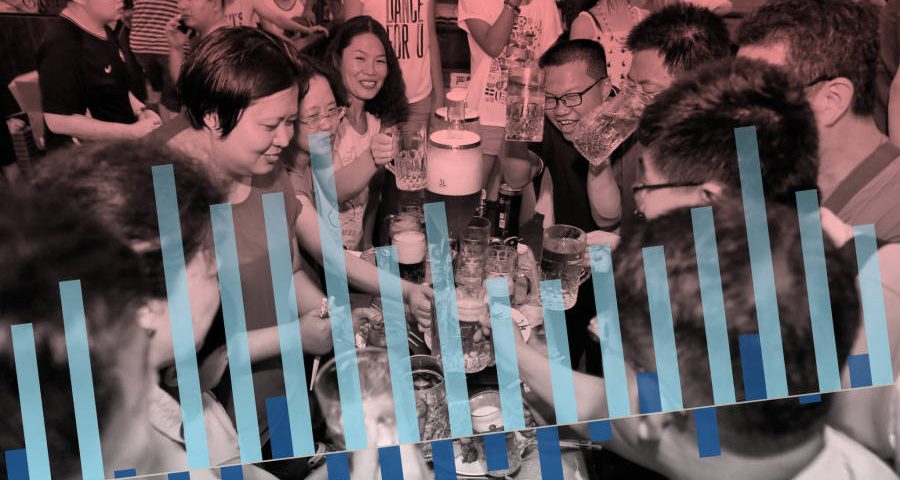 Carlos Brito has such an unquenchable thirst for dealmaking that when he unveiled the £79bn acquisition of SABMiller in October 2015, few people expected the chief executive of Anheuser-Busch InBev to stop there.

Yet the wiry Brazilian’s tactic of doing debt-fuelled acquisitions followed by ruthless cost-cutting to pay for the next takeover seems to have come unstuck after investors took fright at AB InBev’s towering $109bn net debt pile.

Now the 58-year-old is facing one of his toughest challenges — how to manage the company’s debts, while changing AB InBev’s culture from one focused on deals and wringing out efficiencies to one that excels at persuading people to drink more beer.

In an interview, Mr Brito acknowledged that last year’s share price decline of nearly 40 per cent was difficult to stomach both for him and his hard-charging employees, whose bonuses are often linked to share performance.

“There has been a change in mood among investors on emerging markets and companies that have high debt,” he said. But the period of volatility would pass, and AB InBev would soon be back on top, he predicted. “We continue to be very confident in our footprint, brands and our people.”

Mr Brito’s predatory instincts are so strong that one adviser close to the AB InBev boss compares him to a shark, saying: “They can’t stop moving. It’s just not in their nature. M&A is in their blood.”

Nevertheless, the past year has taken the shine off AB InBev’s previously stellar record. Its price-to-earnings multiple has slumped to levels not seen since 2012, and is now lower than that of rival Heineken.

The shares are half what they were at their peak of €122.50 soon after the SABMiller acquisition was announced.

That deal was the culmination of three decades of debt-fuelled acquisitions led by Mr Brito, and backed by the Brazilian billionaires behind 3G Capital. Together, the men consolidated the fragmented global brewing industry and created a colossus that now sells one in every four beers worldwide.

But the deal saddled AB InBev with massive debts and did not deliver the promised volume growth despite SABMiller’s presence in high-growth Africa. And although the promised deal savings have largely been wrung out, the macroeconomic environment has since turned against AB InBev, with emerging markets from Brazil to South Africa hitting the skids.

Given that its massive debt pile is largely in dollars, currency translation meant debt repayments slowed, prompting concerns among investors. 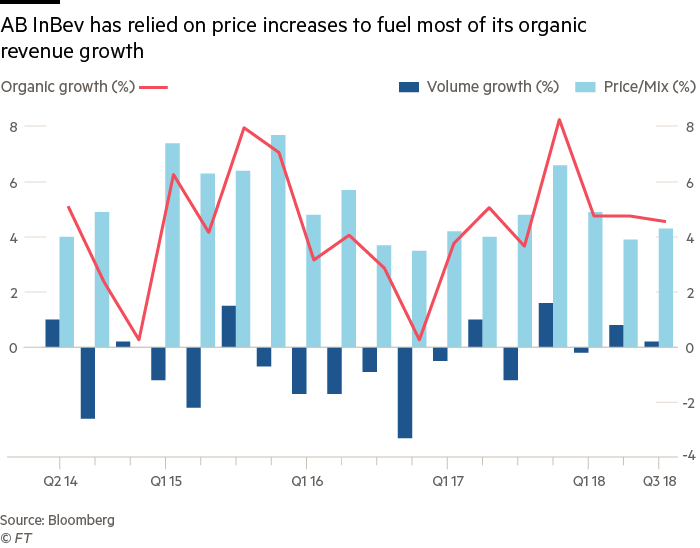 To calm fears, the company halved its dividend in October to save about $4bn a year, and earlier this month it refinanced a $16.5bn chunk of its debt to push out maturities. With its credit rating only three steps above junk — or non-investment-grade status — after a recent downgrade, AB InBev is also considering listing a minority stake in its Asian operations, which would speed debt-reduction.

Behind the share price decline is the perception among some investors that AB InBev has come to the end of its acquisition-led strategy and is entering a more difficult phase.

Yet a company long led by zealous finance types focused on slashing costs is now turning to savvy marketers with fresh ideas to ride to its rescue. There are six marketers in the senior leadership team — up from only two in 2012. Their mission: to accelerate revenue growth by selling more and better-quality beer from Miami to Manila, while relying less than in the past on price increases.

Mr Brito said he was “very excited” about AB InBev’s prospects and convinced its portfolio of brands including Budweiser, Corona, and Stella Artois had broad appeal.

“After the SAB transaction, we have a truly global footprint. We’re on all continents, in all the important markets for beer, and we have very strong brands,” said the CEO.

“The premiumisation trend of people trading up to more expensive beers is only just starting, and will provide us with lots of growth in the coming years.”

Investors will be hoping his optimism is well founded. For now, few have criticised Mr Brito publicly, and the Brazilian remains a legend in the beer business. 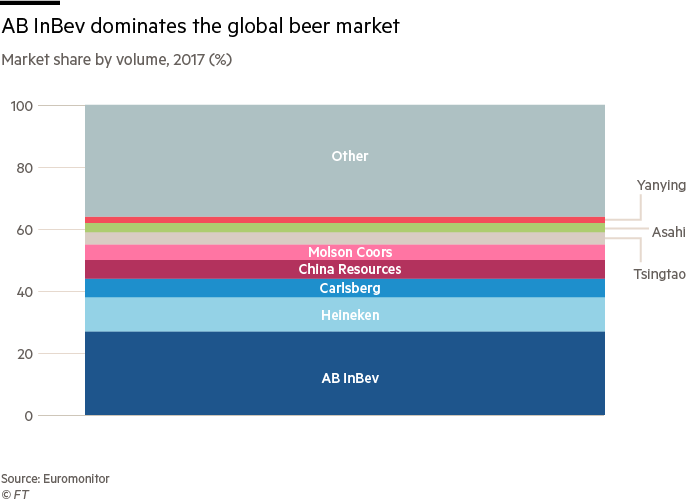 However, Marcus Morris-Eyton, a portfolio manager at Allianz Global Investors, a top 25 shareholder in AB InBev, said the brewer needed to change its ways.

“Clearly doing further large acquisitions becomes more challenging now because of their scale, so they need to be careful to balance the cost and synergy focus after the SAB integration with the equally, if not more important, goal of accelerating top-line growth,” said Mr Morris-Eyton.

“As the market leader, it falls on their shoulders to grow the overall beer market, particularly as beer faces challenges from the rise of craft [ales] and younger consumers preferring wine and spirits.”

Detractors point to the company’s performance in the US as a cause for concern. Its mass-market brands like Bud Light and Budweiser have been losing market share for a while, hurt by the rise of craft breweries offering more local, authentic beers with more interesting taste profiles. 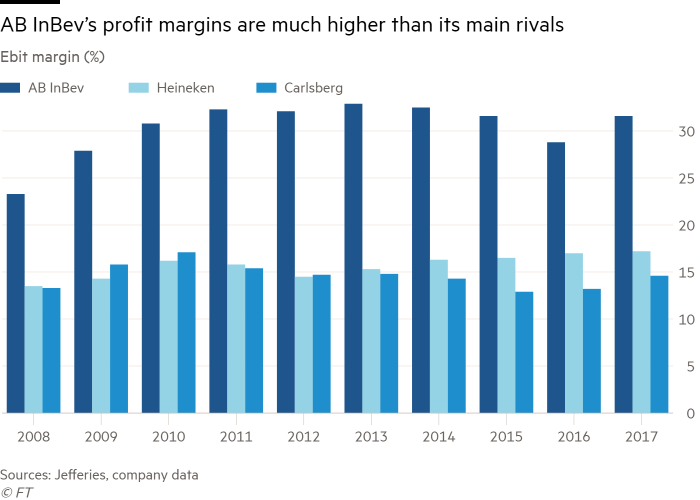 Meanwhile beer’s share of the total alcohol market in the US has been declining since around 2000, while spirits and wine have been gaining ground. Even classic marketing tactics like buying TV ads during sports events have stopped working with health-conscious young people who drink less.

One industry banker said AB InBev’s usual strategy of raising prices to keep revenue growing even as volumes decline was no longer working. “It’s more visible now that they haven’t been able to do anything to address the shift into craft, super-premium and imported,” the person added.

Mr Brito dismisses the idea that AB InBev has not kept up with changing consumer tastes in the US, pointing to how it has bought craft breweries such as Goose Island and fostered good growth at Michelob Ultra, which is marketed as a low-carb option for sporty types. “Today we have a much better portfolio in the US than we had 10 years ago,” he said.

Yet even as AB InBev tries to reinvigorate in the US, Mr Brito is said to be considering a return his old ways: financial engineering and deals.

The company has been in discussions with bankers over options to raise $5bn-$10bn via a minority stake in its Asia business, according to people familiar with the situation. Not only would that help cut the debt, it would also create a new share currency that could be used to pay for deals in Asia, without issuing stock in the parent company. 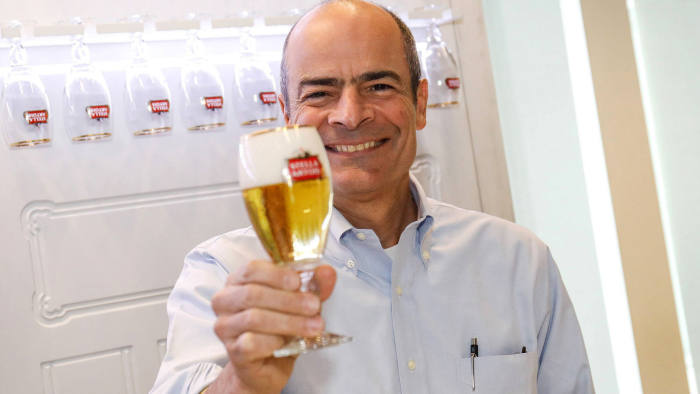 Carlos Brito, chief executive of Anheuser-Busch InBev, said: “Today we have a much better portfolio in the US than we had 10 years ago.” © Bloomberg

The downside would be that AB InBev would be giving away part of the upside in China, beer’s fastest-growing region in the coming decade.

Mr Brito declined to comment. But people close to the company said the main reason to do such a share sale would be to bring back financial flexibility in case acquisition targets emerged.

Alternatively, AB InBev could simply wait for a few years to generate cash to reduce debt: free cash flow is forecast to be $9.2bn for 2018, and $11.8bn in 2019, according to Bloomberg.

The danger, bankers warn, is that AB InBev would miss out on deals or some of his staff may lose interest in the operational turnround and leave.

“If they do nothing in Asia, then the next M&A could be three years from now. In three years, people get bored. There could be real churn internally for the best people. You need to accelerate the recovery,” said one banker.