A barn for books: Creator and spouse return to retail business with new store in Lee | Enterprise 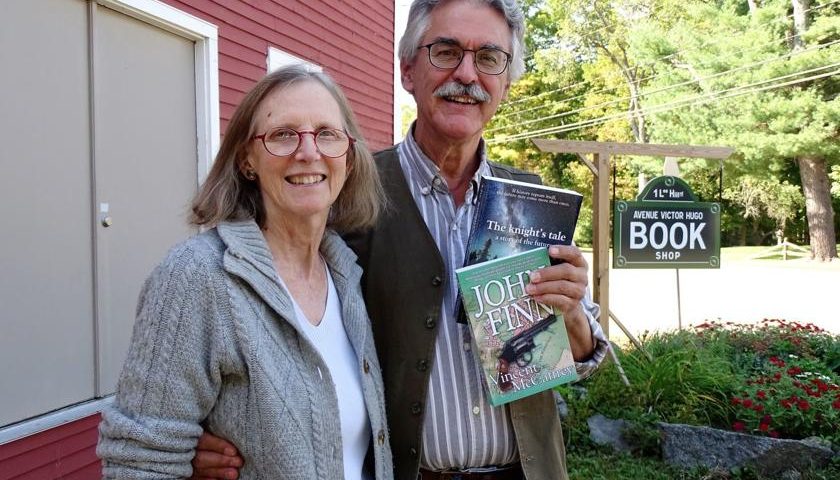 LEE — Inside a red barn at the center of Lee is a bookstore run by author Vincent McCaffrey.

McCaffrey is a novelist who has published “John Finn,” “The Knight’s Tale: A Story of the Future” and “The Dark Heart of Night.” He and his wife, Thais, moved to Lee in 2016 and reopened Avenue Victor Hugo Books, which was a fixture of the Back Bay in Boston for 29 years.

McCaffrey said he and Thais ran an online used-book business for 12 years after closing the Boston shop in 2004, but he missed interacting with customers. So, when his daughter and son-in-law bought a house in Lee that had room for a smaller used-book store in their barn, they decided to move in and have a brick and mortar shop again.

Avenue Victor Hugo Books is open just two days a week but has become popular on the Seacoast with people from the University of New Hampshire’s English Department shopping there, and fans of the old Boston store finding their way there.

Domi O’Brien, of Hooksett, was there one recent Friday afternoon. She remembers traveling from UNH to Boston to buy books at McCaffrey’s shop when she was a college student because of the selection that was available.

“This is the first time I have been to this location,” O’Brien said. “I am with my friend, Julie, and we were out to lunch and said, ‘It’s a nice day for a drive.’ ”

McCaffrey is not writing as much these days, since he has responsibilities as a grandfather of a 3-month-old and a 3-year-old, but he offers advice to people who are interested in becoming authors.

“If you don’t write regularly, you won’t write,” McCaffrey said. He used to write every morning when he ran the online business.

Vincent McCaffrey loves to work with books and says he loves to write more than doing anything else.

McCaffrey said he keeps his characters believable and interesting by having conversations with them as his stories progress.

“The way to make a character is to start talking to them,” McCaffrey said.

McCaffrey also does a lot of research to give his fictional books context. For “The Dark Heart of Night,” he spent time learning about how dangerous it was to be a member of the press in the 1930s.

In the book, New York Daily Mirror photographer Hugh McNeill follows rebellious reporter Cass Green as she investigates a serial killer who is a prostitute doing away with her clients one by one. Green’s investigation attracts the attention of a mobster, and she ends up being a target.

Time Out Chicago’s review of McCaffrey’s writing says he “is never cloying or playing to a demographic. He’s just telling a compelling, old-school yarn, the kind of story a man who knows his literature tells.”