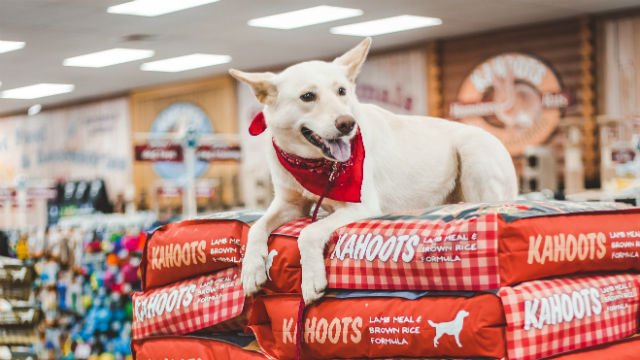 Share This Article:A dog on Kahoots brand bags of food. Courtesy of the company

Mike Bittinger and Ethan Tunnell of Ramona-based Kahoots Feed & Pets stores have won the annual SBA Small Businesspersons of the Year Award, which was recently announced by the local district office of the U.S. Small Business Administration. The agency cited the company’s consistent support of local animal rescue shelters as a factor in the decision. Bittinger is founder and Tunnell is the co-owner.

Kahoots operates an online store plus 22 retail locations in the SoCal region. Bittinger launched Kahoots out the back of a pickup truck in 1987. They said they built the business “bale by bale.” Twelve years after launching the business, the two then started selling its own brand of animal food, along with major national name brands. They were even seen peddling adorable little chicks out of their Ramona store on a recent local television news broadcast.

Today they say they have a product for every animal from “backyard to barnyard.” Seven of the 22 retail stores still sell hay bales, but along with all the other feed and food products.

San Diego student housing investment firm Pierce Education Properties says it reached a significant business milestone this month when it surpassed $1 billion in cumulative acquisitions. Frederick W. Pierce, the founder and top executive, says “there is something significant about a billion dollars…It represents a meaningful recognized milestone worldwide.” Pierce launched his company 25 years ago after being selected as the master developer of the College Community Redevelopment Project sponsored by San Diego State University Foundation. He hired three people to get started but could only afford to pay one person: his secretary, who is still with the company. The other two soon got paid. The firm’s student housing portfolio now includes more than 18,000 beds at 24 campuses nationwide.

The San Diego County Water Authority and its 24 member agencies have launched San Diego Water Works, a new website that provides a comprehensive listing of regional water and wastewater industry job openings. Agency officials said the site will provide updated information about internships and training opportunities — a one-stop-shop for job seekers interested in working in the water industry. They said they wanted to deal with the “silver tsunami” of retiring Baby Boomers by reaching out to the retired military for a fresh infusion of workers. State legislation signed into law in 2019 makes it possible for veterans to receive credit for their military education and experience when applying for certifications in California.

U.S. Bank’s local unit gives a $10,000 grant to Partnerships with Industry, a local nonprofit that matches workers with developmental and intellectual disabilities with meaningful work. The grant was part of U.S. Bank’s Community Possible program, which involves investing in organizations that focus on economic and workplace development. PWI says it works with 250-plus businesses countywide to find jobs for several hundred people with developmental disabilities.

The Casa Cornelia Law Center will present its 13th Annual La Mancha Awards on Oct. 15 in a digital format in recognition of exceptional volunteers who have helped further the organization’s mission to provide access to justice and quality pro bono legal services. Attorney Jeff Sheriff wins the Distinguished Pro Bon Attorney of the Year award while law firm Latham & Watkins wins the Pro Bono Law Firm of the Year award. The annual dinner raises money to help fund quality legal programs for communities and individuals most at risk

Consulting firm The Vertex Companies has acquired Xpera, a local real estate consultancy led by economist Alan Nevin. Nevin says he and his team will join Vertex’s consultants in North America and Europe. A graduate of Stanford University, Nevin has a broad background in real estate development, investment and market research. He is behind the San Diego MLS Economic Report, which offers an in depth look at the residential property market in the region. Vertex is employee owned.

Finally, the Port of San Diego complete its $24 million modernization of the Tenth Avenue Marine Terminal. Port CEO Randa Coniglio and Mayor Kevin Faulconer, along with a number of other local officials, celebrated the event late last month. The U.S. Transportation Department contributed $10 million to the project, which included the demolition of two obsolete warehouses and creation of area for special cargo such as overly large electric windmill components. The port says it began attracting new business even before the multi-year project was complete. For example, last month the port handled a shipment of the longest electric turbine blades received to date — 45 that were 67 meters in length. This shipment would not have been possible without the modernization project, said officials.

Tom York is a Carlsbad-based independent journalist who specializes in writing about business and the economy. If you have news tips you’d like to share, send them to tom.york@gmail.com.