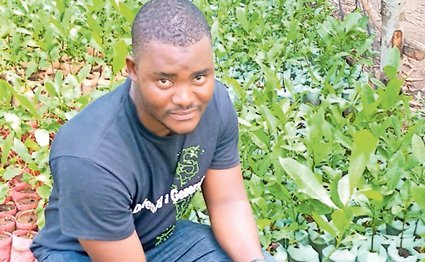 By MISHI GONGO
More by this Author

A Seeds of Gold team finds Jundan working at the seedlings’ section, checking if any is in distress.

“I started growing seedlings while in secondary school to partly cater for my school fees and pocket money because my father had passed on,” says Jundan, 30.

After completing high school, he proceeded to International University of Africa in Khartoum, Sudan, where he graduated with a bachelor’s degree in Minerals and Petroleum studies in 2018.

Soon after, he returned home in search of a job, which was hard to come by. Jundan, therefore, turned to his first love – seedlings farming. He has in the process created a job not only for himself but for other youths as well.

He grows his seedlings in trays for quality and to curb diseases and pests.

“Inside the plastic trays I put coco peat, which is a multipurpose growing medium made from a coconut husk. The fibrous husk is pre-washed, machine-dried, sieved and is free of contaminants,” he offers.

According to him, coco peat is a good alternative to soil or peat moss.

“It has high water-holding capacity, it is 100 per cent organic and maintains good temperatures, making it an ideal growing medium for seedlings,” notes the farmer, who currently has 15,000 seedlings that he sells at between Sh100 and Sh200.

He starts by putting the coco peat in a basin, then adding foliar feed and mixing thoroughly. Once the mixture is ready, he puts it on the trays, makes holes and plants the seeds.

For grafting, when the seedlings are about four weeks old, he gets a scion from a mature tree and a rootstock from a small plant and ties the two tightly.

“Most farmers fail to get good yields due to poor seedlings. If you start with bad seedlings, you cannot get a good harvest,” says Jundan, who adds that he has so far managed to train 50 farmers in Kwale, mostly the youth.

Among the things he teaches the farmers are crop rotation to deal with pests, use of manure and how to identify other crops that can do well on their farms by testing the soil.

“Why should one plant maize or cassava throughout the year when there are other crops that have good returns and take a shorter period to mature?” he posed.

Apart from farming tips, he advises farmers on how to choose the best greenhouses and install them.

“I am earning from my farming and the consultancy. There are people out there who want to invest in agribusiness but lack skills. I partner with such a person and share the profit – 60 per cent for him and 40 per cent for me. We do a legal agreement,” says Jundan, who attends farmers’ field days for knowledge.