Market dimension of the worldwide consulting business in 2020? 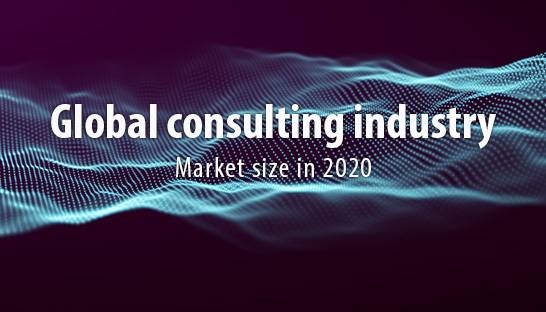 The consulting industry stands to take a sizeable hit from the Covid-19 crisis, and according to the latest estimates, it will be worth around 18% lower at end of 2020 as a result. However, the outlook in many European countries seems to be improving, as they succeed in driving down the number of new coronavirus cases.

Consultants are professionals that provide professional or expert advice in a particular field of science or business, to either an organisation or individual, in return for a fee. As consultants are typically frontrunners in their field of expertise, they can help clients tackle some of their most pressing problems but also play key role in forward-thinking strategies and innovation.

Executives hire external advisors to help them with all manner of issues; from strategy and corporate planning, to support mergers and acquisitions, to market entry into new markets or segments. At the same time, consultants work across every field and sector of the economy, leading to a supremely flexible, multifaceted industry. This adaptability has been at the heart of the consulting industry’s continued success, as over the past decades it has ballooned into a multi-billion dollar industry, becoming one of the largest segments within professional services.

The global consulting industry has grown strongly in the 12 years since the last financial crisis. By the reckoning of Source Global Research, the planet’s consulting scene is now worth a combined $160 billion, but with the coronavirus having pushed many sluggish economies to the brink of a recession, clients are delaying projects, decreasing their scope or cancelling them all together. As a result, the revenue of consulting is taking a big hit.

Previous Consultancy.org analysis of Source Global Research data suggested that the global consulting industry was set to see a collective revenue drop of $30 billion – however two months later the picture has marginally improved. While the drop of $28 billion now forecast is still little short of catastrophic, the fact what was a 19% reduction has eased to one of 18% shows that there may be some inkling amid experts that the end of the current crisis may be in sight.

This improved forecast has largely been buoyed by the continent of Europe, which has improved most substantially of all consulting industry regions. The most recent data available currently points to a decline of 22%, compared to 28% in March. Illustrating this, German consulting has seen a major turnaround in expectations since the emergence of the crisis.

Having initially expected a drop in demand of around 30% – due in part to its large manufacturing base seeing disrupted supply chains – Germany now may see shrinkage of around 18% in consulting demand. Thanks in large part to its comprehensive lock-down, which seemed to effectively stifle Covid-19’s spread in the country – and widespread Government support of businesses and employees, the nation’s consulting industry may well foreshadow a wider economy which will have weathered the storm better than most.

Of course, as was the case with earlier studies, the picture is not the same everywhere – and this can clearly be seen with the state that UK consulting finds itself in. The UK Government’s response could scarcely have been more different to that of Germany, with contradictory messages on the severity of the pandemic, a delayed imposition of a lock-down, and stringent cuts to healthcare spending being maintained during the crisis. While the UK’s outlook is slightly brighter than the 28% fall initially anticipated, the large impact of coronavirus and the continued uncertainty of Brexit mean the UK is still facing a 22% decrease in revenues.

While the outlook still seems cloudy for Britain, however, it pales in comparison to the situation in North America. In March, data suggested that North America would see shrinkage of 15%, but two months later, that figure stands at 18%. By contrast meanwhile, Asia Pacific meanwhile still looks likely to be least severely hit by the coronavirus. As consultants there have benefitted from a stringent response to the outbreak in countries like South Korea and China, many have been able to begin working with clients to try and return life to ‘normal.’ At present, energy and resources looks likely to be the consulting industry vertical most affected by Covid-19. With oil prices having plummeted amid the crisis, as demand for fossil fuels from various forms of transport and industry have dropped to virtually zero, clients in the segment have tightened their belts and scaled back on consulting spending. It is expected consulting revenue in this area will fall by 30%, the joint-highest amount with business services.

Manufacturing is expected to see the next highest fall in consulting revenues, at 23%, due to the closing of most non-essential factories amid the crisis. Oddly, healthcare remains the only other segment anticipating a fall in fees of over 20%, perhaps due to the extent clients like the NHS are having to prioritise treatment over ‘luxuries’ such as digital transformation projects in the immediate fall-out of a pandemic that has pushed them to the brink.

Unsurprisingly, however, pharma consulting is likely to find itself almost in business-as-usual mode, seeing just a 2% fall in revenues. Demand for pharmaceuticals amid the largest public health crisis in a century will be high, meaning there will still be the funds available to invest in consulting projects for many clients. Meanwhile, as companies continue to search for a cure or a vaccine for Covid-19 – and the lucrative patents that could bring with it – they will be keen to bring in experts who can help them get the edge on competing firms.