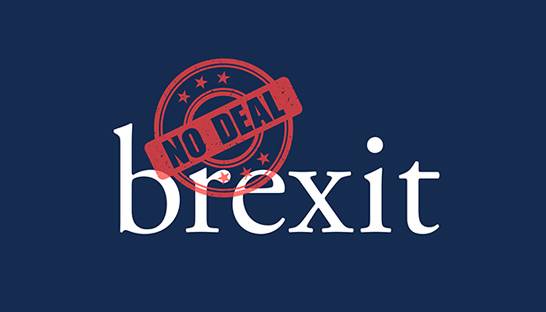 Dada Enterprises, a business consultancy based in London, has developed an interactive ‘No-Deal Brexit’ guide for businesses in the UK. The guide helps businesses understand the operational impacts of Brexit to their operations and provides practical measures that firms can take to mitigate them. Sachin Melwani, Managing Director at Dada Enterprises, explains below.

No-deal Brexit, crashing out, or a departure on WTO terms – call it what you will – means the UK leaving the UK without a Withdrawal Agreement and crucially without a transition period. Under a No-Deal Brexit scenario the UK would leave the single market and Customs Union with immediate effects for UK businesses that import or export goods to or from the EU.

How likely is ‘No-Deal’ to occur? And what would it mean? Have you even started preparing? A research note released by SOCGEN on August 30th says the chance of a No-Deal Brexit on October 31st has risen to 45%, with an early general election looking highly likely regardless of the Brexit outcome.

Despite Boris Johnson saying this would be highly unlikely on the Conservative leadership contest following his controversial decision as prime minister to prorogue parliament next month, the Betfair Exchange reports that the odds of a No-Deal Brexit are being traded at their lowest prices this year. Odds of a no-deal scenario have now been priced at 5/4 according to Betfair, marking a drop from the 5/2 odds recorded earlier this month, and 9/1 earlier this year, with predictable effects on the sterling.

Dada Enterprises sponsored an event in November 2018 at the Institute of Directors (IoD) which brought together delegates from around the UK and across numerous sectors to hear a range of speakers explore the impact of Brexit on project delivery. Now, in their continued interest to support UK businesses, DADA have released a free interactive guide which helps businesses in their preparation for a No-Deal Brexit.

The constantly fluctuating Brexit timeline and chances of a Brexit deal have left many companies with a false sense of confidence over a potential transition period which may not be there. Elizabeth de Jong, Freight Transport Association (FTA)’s Director of UK Policy, commented: “FTA represents the interests of 17,000 logistics businesses; declining profit margins have left them struggling to fund their Brexit preparations. Profit margins were only 2% in 2018, making any significant financial investment very difficult to justify for any business, especially when the international trading landscape post-Brexit is still to be determined – logistics companies simply do not know what they should be planning for.”

De Jong added: “It is of no surprise, then, that at the time of FTA’s 2019 Logistics report (first quarter of 2019), 37% of respondents surveyed had not taken any action to prepare for Brexit and only 17% had created a plan for a No Deal Brexit.”

This is an incredible admission from an industry sector that has known from the outset it will be on the front-lines of any Brexit impacts. Brexit would expose 145,000 traders to Customs formalities for the first time, creating an additional 200 million declarations per year. How, when and where you submit those declarations is the key to achieving the smoothest UK-EU-UK supply chain post-Brexit. The current lack of preparation, however, is significant.

The lack of preparedness on the part of businesses is a point reiterated by the interim director-general of the Institute of Directors, Edwin Morgan. “Until recently the level of planning has been fairly low. Our surveys show that businesses had been waiting to see what happened. The message from the government is getting clearer, but is still not clear enough.”

The chairman of the Federation of Small Businesses, Mike Cherry, is even more pessimistic. “The ongoing political uncertainty has meant it’s impossible for them to invest, expand and hire when we don’t know what the future holds.”

Despite these concerns from the business champions, the denial syndrome among Whitehall was laid bare when a leaked Government dossier codenamed Operation Yellowhammer which highlighted concerns over oil, food and medical shortages and civil unrest was demurred as only “a worst case scenario” and hardly worth a murmur of concern.

DADA’s guide helps businesses identify the issues that those delivering complex infrastructure and IT projects need to worry about. To fail to do so could also leave firms exposed to heightened contingency planning and transition costs as they scramble to manage the impact post Brexit-day where the costs of late contingency planning will inevitably come with a sizeable premium.

For projects, it is inevitable that cost pressures will rise through material inflation, staffing shortages, new regulations and logistical challenges – all of which may lead to increasing compensation events and changes to the expected benefits and profitability of planned and in-flight projects.

What can unprepared businesses practically do at this stage? For businesses who’ve done some planning, have all areas been considered? And for those who’ve done nothing, hoping we would never get to this stage, how can they still prepare? It’s critical for businesses to understand the specific impacts on their operating model.

DADA’s free interactive guide highlights the areas where businesses can still make a difference in the limited time available. From practical tips such as setting up a help-desk to role-playing when your first import/export will be after the 31st October and what support would be required, DADA’s guide prompts concrete actions for businesses to take to prepare. In addition to collating key HMRC guidance documentation for importers and exporters, the guide also provides checklists for businesses to assess the risk on their intellectual property, contracts and projects. A key part of their guidance is that businesses, even at this stage, can mitigate some impacts through carrying out a trade and tax impact assessment.